What Every Shipper Needs to Know About Canada

Canada is a big, diverse, scattered country of (reputably) polite people. (Whether we actually say “eh” is a matter of regional debate.) While we’re influenced by and integrated with the global economy, our geography, transportation system, regulations and more all impact the experience of those whose goal is to get their goods to the Canadian market.

If you’re new to shipping in Canada or have some experience but wonder if you might be missing something, this article from the experts at McKenna Logistics covers the need-to-knows.

What you need to know about Canada’s geography 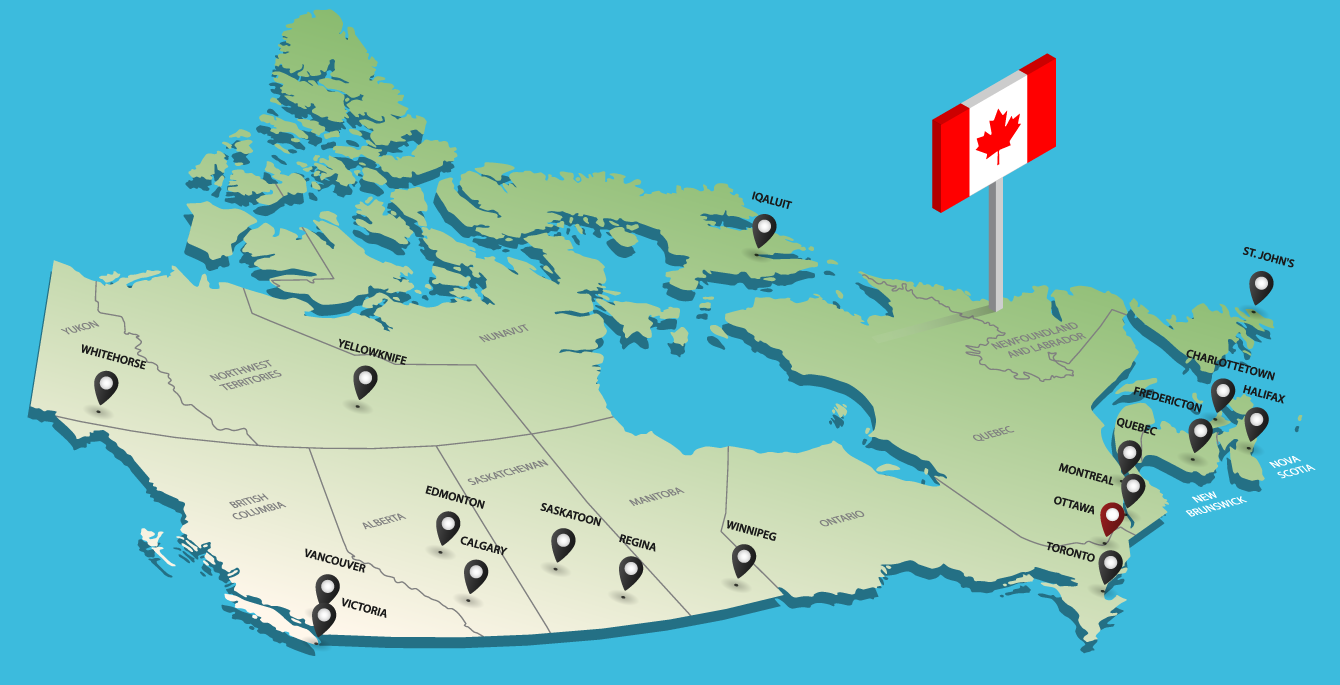 We have a population of 37.5 million, which works out to around 4 people per km2. (Yes, we use the metric system.) According to the 2016 Census, 66 percent of Canadians live within 100 km of the U.S. border. The most populous provinces, in order, are Ontario (14.2 million people in 2017), Quebec (8.4 million people), B.C. (4.8 million people) and Alberta (4.2 million people). Seven in 10 Canadians live in an urban area, with the five largest cities being Toronto, Montreal, Calgary, Ottawa and Edmonton. Our population growth has been the highest of any G7 country since 2001.

What you need to know about Canada’s culture

The face of Canada is changing. According to the 2016 Census, more than one in five Canadians is foreign-born. Most of Canada’s recent immigrants come from Asia (61.8 percent) and Africa (13.4 percent), but more than 250 ethnic origins were reported on the 2016 Census. Almost a quarter (22.3 percent) of Canadians identify as a visible minority.

Canada is officially bilingual and the two national languages—English and French—must both be on the packaging of any goods sold in Canada. In a nod to our colonial roots, we use British English spelling, not American.

What you need to know about trade in Canada

According to Transport Canada, the U.S. is Canada’s top trading partner, accounting for more than 60 percent of our total trade for the past decade. In 2018, trade with the U.S. was worth $741 billion, with $438 billion of that being exports from Canada and $304 billion being imports from the U.S. into Canada. Supply chains in Canada and the U.S. are highly integrated, with many products crossing the border several times during production. 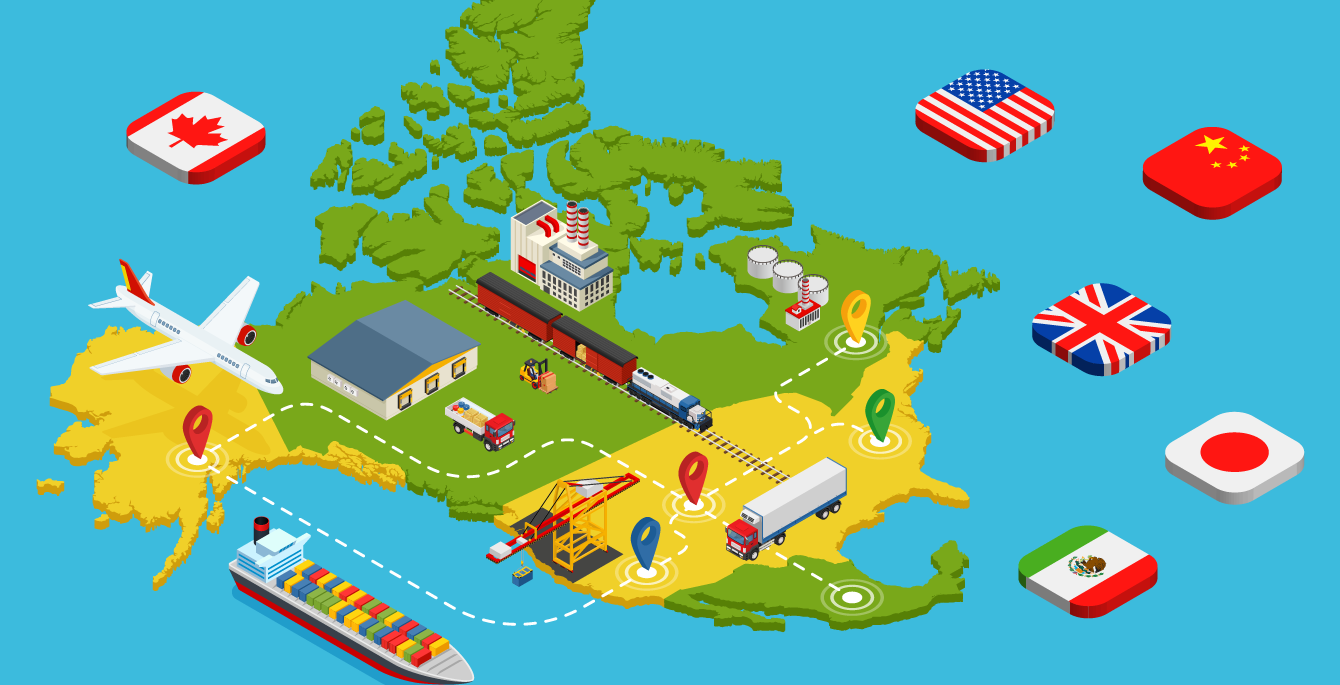 Our other top trading partners are China, Mexico, Japan and the United Kingdom, amounting to just over 17 percent of our total international trade in 2018.

More than half of total merchandise exports by value (not including pipelines) in central Canada travelled by road in 2018, compared to 32 percent in the west and 19 percent in the Atlantic regions, where more exports are by ship.

Domestic trade between Canadian provinces increased 8.5 percent between 2016 and 2017. In 2017, the interprovincial merchandise trade was valued at $170 billion.

What you need to know about Canada’s transportation system

The majority of goods movement in Canada is by truck. Unlike the U.S., which has a web of well-developed highways connecting people and places, Canada has one main transportation artery—the Trans-Canada Highway—stretching from coast to coast. Those who live off this beaten path—particularly to the north—are much more difficult to reach with goods, although their expectations as consumers may not be much lower than their urban, easy-to-service neighbours.

Recognizing the importance of the transportation network to Canada’s competitiveness, the federal government announced an 11-year, $2 billion National Trade Corridors Fund in 2017. The fund’s priorities are to help build a more efficient transportation system to provide better access to domestic and international markets, as well as to support initiatives that will help the system adapt to the impacts of climate change and adopt new technologies.

What you need to know about transportation regulations

Federal transportation regulations are constantly evolving in the name of public safety and the environment. To protect the public from fatigued commercial drivers, for example, the Government of Canada will require all federally regulated truck drivers to use electronic logging devices by June 12, 2021.

This year, the government will be instating new entry-level commercial driver training regulations. Also in 2020, new federal carbon pollution regulations for heavy-duty vehicles will come into effect, with escalating requirements in future years.

However, many transportation regulations are provincial, and a lack of cross-country harmonization has been blamed for inefficiency in the trucking sector.

What you need to know about the Canadian truck driver shortage

Over 300,000 Canadians are employed in the trucking industry, and trucking is the number one employer of Canadian men. That said, Canada’s freight industry is suffering a similar plight to our neighbours to the south—a shortage of drivers to the tune of 25,000 to 33,000 by 2020, according to the Conference Board of Canada.

Possible solutions include bringing foreign workers to Canada as truck drivers and using self-driving trucks, with the latter being a while off, even though tests of semi-autonomous trucks have been conducted on Canadian roads.

McKenna can be your trusted Canadian logistics expert

Canada is a big, beautiful country with its share of transportation challenges. If you’re looking for a logistics partner that knows the ins and outs—and ups and downs—of transporting goods within Canada and beyond, we’d love the opportunity to share our intel with you.

Find out how partnering with us can optimize your potential for success in Canada. Let's talk about your importing opportunities.

Looking for a Better 3PL?

Get a Tailored 3PL Solution

Ready to Grow Your Business?

If youâre getting started with mass retailers, we can help